Music in an Uncertain Global Economy

Here are two important news stories of relevance to the future of music in the global economy:

(1) According to a very recent report, Google (in partnership with Warner, Sony, Universal, EMI, and others) has just launched a new music service in that may help open an enormous music market that has until now consisted of 99% pirated copies and illegal file sharing. In theory, this could be a very positive development for professional musicians, but will it be so?

(2) A BBC World Service survey of 29,000 people has found “broad support for reform of the international economic system ahead of the G20 summit.” According to the article, “More than 70% of people in 29 countries think major changes are needed in the way the global economy is run.”

Despite such survey results, there is also strong evidence that many place little faith in the G20:

Also, here is a link to the 2009 digital music report of the International Federation of the Phonographic Industry, which offers an industry perspective on recent changes in music production and consumption:

Posted by Sociomusicology at 1:47 AM No comments: 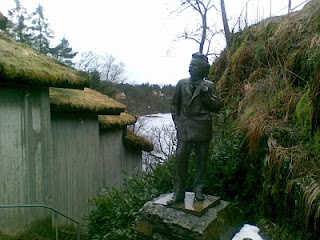 During the past two months I have had lectures and/or meetings at the following institutions:

It is inspiring to see various new developments in the field of music at higher education institutions across the Nordic region. With the exception of , the Nordic region seems to have been less affected by the global economic downturn than most other parts of the world (and despite some very recent trends, might turn out to be as resilient as India), but even here there is increasing concern for the efficiency and financial viability of universities that will likely lead to further restructuring of national educational systems. Music continues to be valued and supported, with new approaches to performance, pedagogy, curriculum and research that may rightfully be regarded as “cutting edge” and innovative in a global context.

Here is a link to an insightful report from 2004 by Marja Heimonen that describes Nordic music conservatories:

[I recently took the above photo of this statue of Grieg near his former residence in Bergen, Norway.]

Posted by Sociomusicology at 2:19 AM No comments: