The First Band in Japan? 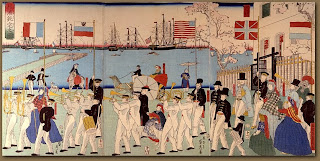 Some important new discoveries were made during this past week regarding John William Fenton (b.1828), who formed what appears to have been Japan's very first band comprised of western musical instruments. Fenton arrived in Yokohama in 1868, just at the start of the Meiji era, where he founded bands and orchestras and even composed the first version of Kimigayo, Japan's national anthem. Over the next 140 years, Japan would enthusiastically embrace western music, eventually becoming a globally significant producer and consumer of European and American genres, ranging from classical to jazz, rock, and more. Until this week, however, the final chapter of Fenton's life had remained completely unknown to music scholars both within and outside of Japan. It was thought that after living in Japan, Fenton had settled somewhere in the rural midwestern United States, where he disappeared.

Suddenly, after more than a century of mystery, there are some new details. On June 16, I was contacted at my Boston University office by a thoughtful genealogical researcher in who had on that very day obtained records of Fenton’s final years in . . . of all possible places . . . beautiful . It was very kind of her to provide this information, and I was able to help communicate these details to Toshio Akiyama so he could announce them at the Japan Bandmaster’s Association meeting in this past Saturday. These findings will be one other new detail included in my book on wind band music in Japan that is scheduled for publication later this year.
Posted by Sociomusicology at 8:48 PM No comments:

Multiculturalism in Music and Education


To what extent do musical experiences open windows to intercultural understanding?

For the past few decades the effects of multiculturalism have been seen in the field of music education within and elsewhere. While many contributions in this area have been effective and inspiring for a new generation of music students, others have reinforced stereotypes and given “multiculturalism” a poor image. Although the ideals of multiculturalism may now seem to be rather widely shared, there is actually little agreement regarding finite connotations of the term and the motivations of those who would advocate it as a component of educational philosophy. “Multiculturalism” is no longer the popular concept in educational discourse that it had been in the 1980s and 90s, and in many nations there is less interest in recognizing the cultures of minority peoples than in attaining a unified and patriotic national identity. Why is this so? Is multiculturalism no longer relevant? How have the meanings of "multiculturalism" changed in the domains of music and education? More research and scholarship are sorely needed in this field.

Current Activities in this Area:

Also, here is a webpage with individual links to several of my publications on this topic:

Posted by Sociomusicology at 7:38 AM No comments: