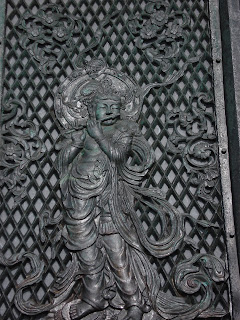 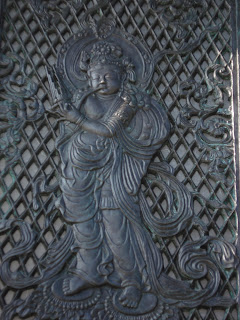 These are photographs taken in Nara at Tōdai-ji (東大寺) (meaning “Eastern Great Temple”). 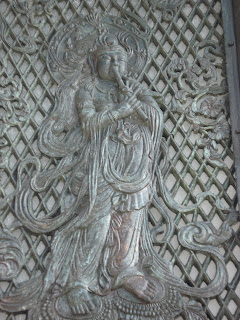 The images show panels of the enormous bronze octagonal lantern (from the 8th century) that is prominently located outside the grand entrance to the world’s largest wooden temple, the hall of the Todai-ji Daibutsu. Each panel depicts a musician playing a different wind instrument, including the sho, shakuhachi, and what appears to be a shinobue. 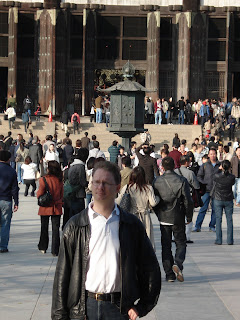 Here the lantern can be seen from a distance in front of the Daibutsu hall, and I am looking out of place in the foreground.
Tomorrow I am very pleased to have the opportunity to interview Japanese wind music composer Tetsunosuke Kushida, who has produced many outstanding works (mostly for European wind ensemble) that are based in the aesthetics of Japanese traditional wind music.
Kushida is from Kyoto - near Nara - and many of his works are programmatic, featuring themes such as Japanese traditional festivals and ancient bugaku dance, and even combining Japanese and European wind instruments in new and interesting ways. Like Alfred Reed, he is especially skilled at writing music for beginners that makes a strong musical statement without requiring very high levels of instrumental technique. I find that this art of producing hybrid music for school ensembles seems to be underappreciated among elite artistic communities, but it may in time attain greater recognition. Kushida has also produced works for professional ensembles, including Figuration for Shakuhachi and Band.

Kushida is one of the only influential Japanese band composers I had not yet had a chance to interview. Japanese composers are discussed in my forthcoming book, Wind Bands and Cultural Identity in Japanese Schools (Dordrecht and New York: Springer). Other notable Japanese wind music composers include Hiroshi Hoshina, Yasuhide Itoh, Isao Matsushita, Masamichi Amano, and Toshio Mashima. As part of this research, I also interviewed the Japan Bandmasters Association founder Toshio Akiyama, and discussed Japanese bands with leading Japanese musicologists as well as the managers of the Tokyo Kosei Wind Orchestra and Osaka Municipal Symphonic Band, All-Japan Band Association competition, Japan Salvation Army Bands, and the Central Band of the Japan Self-Defense Forces.
The case of wind bands in Japan is especially interesting in terms of the themes of music transculturation and hybridity, as well as the institutionalization of new musical traditions. The unusually effective pedagogical approaches of Japanese bands are also of great interest to music educators outside of Japan.
Here is a link to my webpage at Boston University:
http://www.bu.edu/cfa/music/faculty/hebert/