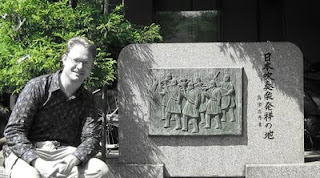 Ethnomusicologists are researchers who study music as a cultural phenomenon, and although much of ethnomusicological research addresses contemporary practices, some studies also examine historical questions. This summer I have been thinking a lot about the methods of historical ethnomusicology, examining how studies in this subfield as well as in related fields such as anthropology, cultural history, and historical sociology, grapple with how to meaningfully represent the musical past in scholarship: both the evidence-based past of empirical research and the remembered past of cultural narrative (both of which seem important in very different ways).

Much of my data collection in this summer has focused on questions related to how the history of western music and music education within this nation is perceived in relation to the reality of what can be confirmed by historical data. Assuming that most of what had already been written on this topic was probably true, I entered this study with some untested beliefs and then encountered several surprises along the way. Many common interpretations and beliefs regarding this history have turned out to be rather different from what may actually be confirmed, including such questions as the following:

What is the oldest surviving form of European music in ? How did the first European instruments arrive in ? Who taught the first European string, percussion, brass, and keyboard instruments in , and how and where were they taught? What is the oldest continuously performing westernized music ensemble in ? What is the oldest professional European orchestral ensemble in ? To what extent is it accurate to suggest that a particular individual may be regarded as the “Father of Western Music” in ? For what reasons did European instruments and music lessons become so popular in this nation? How did Japanese manage to produce the world’s largest musical instrument companies, and what has been the role of music industry in ’s system of music education? In what ways has the Japanese system influenced other Asian nations? How and why did music competitions become so popular in Japan?

Based on a thorough review of documents in Japanese and European languages (which range from rare archival materials to very recently published research articles), as well as consultation with many Japanese experts and additional interviews and observations, I have developed a revisionary interpretation of this history which I look forward to discussing with other scholars, particularly those examining similar questions in the field of historical ethnomusicology.

Final Weeks of Summer in Japan


On Sunday I attended the 48th annual Osaka prefectural wind band competition (48回大阪府吹奏楽コンクール) in Minoh, Japan. As expected, the bands there were outstanding, and I think the adjudicators also did an excellent job. Particularly memorable were performances of Jun Nagao’s Reminiscence by the Miki Wind Philharmonie and of Masamichi Amano’s The Sea’s Aurora by the Minoh Youth Band. The bands that received the highest awards at this contest will advance to the regional competition, and those who receive the highest awards at that event will advance to the national level. Since the end of 2004, my research has suggested that the All-Japan Band Association's annual national contest is probably the world's largest music competition in terms of the number of contestants (over 14,000 bands, with a recently estimated total of 800,000 competing musicians). Nowadays, many music scholars in Japan and abroad seem to agree that there appear to be no larger music competitions in the world.
Here is a link to the final results from the Osaka-level event:

Next week I am visiting the headquarters of Yamaha, Kawai, the Keishicho Museum, Showakan Reading Room, Finnish Institute in Japan (at the Embassy of Finland in Tokyo), and Professors at Tokyo Gakugei University and Yokohama National University.


It is a pretty busy schedule, but I expect to acquire some interesting new information and make progress on planning for future research projects.


Below is a link to an interesting report just released from the entitled “Forty Years After Woodstock, A Gentler Generation Gap”. The report describes changing perceptions regarding both generational differences and music preferences in the . Such studies may contribute to evaluations of the relevance of music education programs in contemporary society.


Posted by Sociomusicology at 6:48 PM No comments: