On July 21, the technology company Apple “disclosed its first quarterly decline in iPods sold” as discussed in Arik Hesseldahl’s provocative article “The iPod Is Dead. Long Live the iPod,” from the latest issue of Business Week (linked below).

New music technologies are increasingly expected to offer multifunctionality while younger generations of music consumers seek products that facilitate more active and empowering forms of creative interaction rather than mere passive reception of music. The very nature of human musical experience is changing to some extent with each new generation of music technologies.

Below are some informative links related to the history of sound recordings:

Posted by Sociomusicology at 7:19 PM No comments: 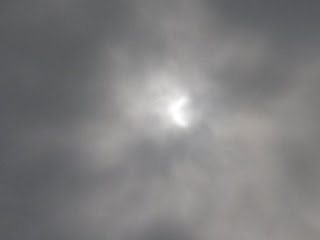 This partial eclipse was visible from at around 11am today. Many people took a short break to observe it, a chance that only comes once every 40 years.

Recently, I have been enjoying listening to Toru Takemitsu’s composition for shakuhachi and biwa, aptly entitled Eclipse.

Posted by Sociomusicology at 8:24 PM No comments: 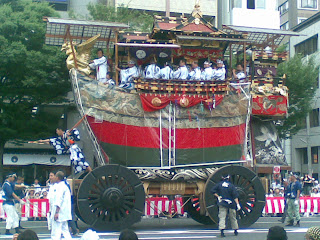 Yesterday in Kyoto was the Yamaboko Junko parade of the Gion Matsuri, which is one of Japan’s three most famous festivals. The origins of the Gion Matsuri are traceable to 869 AD, and the highlight of its parade is the nine hoko, or enormous floats, each of which is pulled by a team of around 30 to 40 men. Each hoko contains several musicians playing the distinctive gion-bayashi (祇園囃子) festival music, which features the shimmering sounds of gongs, taiko drums and flutes playing semi-dissonant motifs. Attached is a photograph I took of one of them while I attended the event with Helena Capkova and others. Interestingly, women are not permitted to participate in any aspect of the parade, and this 1,100-year old festival also has strong religious connotations, both of which are factors that have hindered the wide adaptation of such festival music traditions into schools.

Future of the Bolshoi

According to a recent story by Dave Itzkoff in the New York Times, Alexander Vedernikov, the “chief conductor and music director of the Bolshoi Theater resigned suddenly on Monday . . . throwing the future of the institution’s $1 billion renovation project into chaos.”

About six years ago I lived in , where I taught music courses for Lomonosov Moscow State University and performed and recorded with the Pan-Asian ("Wa-On") Ensemble at Tchaikovsky State Conservatory. During that period, I would frequently visit the Bolshoi, which despite recent challenges has remained a uniquely important venue in the field of European art music, a priceless landmark. Any visitor to the Bolshoi Theatre can confirm it is a truly impressive place worth preserving for future generations.

The current situation at the Bolshoi reminds us of the importance of ensuring that the significance of cultural heritage is not hastily dismissed during times of economic crisis. Through organizations such as UNESCO, European Union commissions, and various NGOs, it is possible to effectively turn the attention of lawmakers and corporate boards toward the urgent needs of global musical heritage sites, whether calling for renewal in , , or .

Here are links to some related programs:

Posted by Sociomusicology at 5:44 PM No comments: